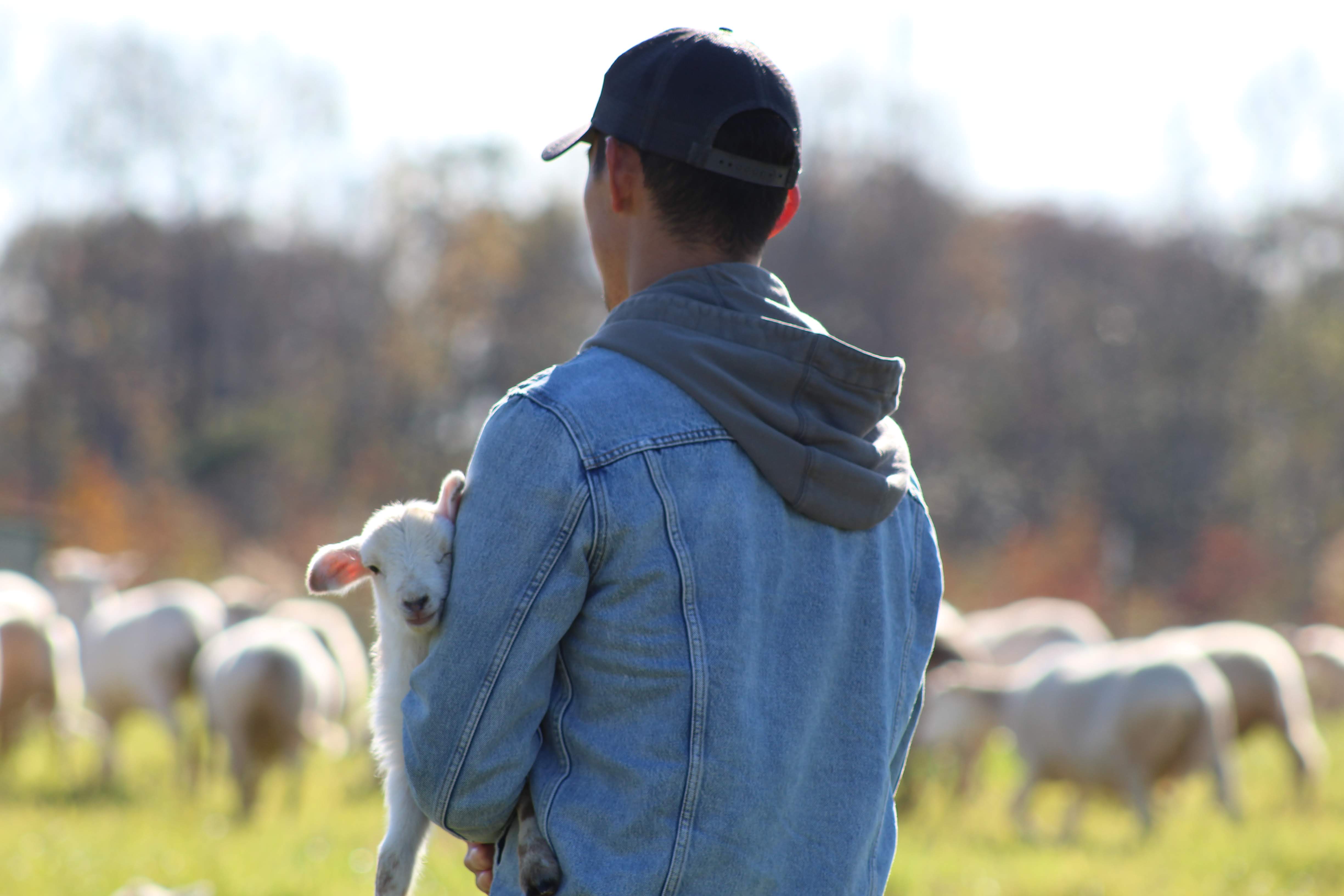 Me carrying a baby lamb that was falling behind during a move.

Weeks later, fretfully re-reading our WhatsApp messages, I thought back to that easy summer night that somehow led to this. The debate began in Mexico City, seated in an airy restaurant in a hip part of town, as we both looked over the menu for what was meant to be an ordinary catch-up dinner. Ordinary, except she was traveling for a few months before starting business school and I had just left a high-stress San Francisco tech job, so we were both free and unencumbered.

Hungry to sample what the trending CDMX restaurant scene had to offer, I proposed a few shareable dishes before she reminded me of her vegetarian leanings. I probed a bit, setting our menu perusal down the scenic route to tour the ostensible benefits of a plant-based diet. I nodded along to the familiar health and environmental soundbites that riddle headlines touting this increasingly popular lifestyle choice. I demurred, then immediately regretted that impulse. I should have known better — I once ran a Paleo food business and know all too well the dogma that comes with dietary beliefs, be they Paleo, vegan, or otherwise — but I couldn’t help myself. I have always been skeptical of vegetarian and vegan ideology. To me, any diet that increases your need for supplementation is, by definition, incomplete.

Luckily, despite a couple of strong cocktails and impending h-anger, saner heads prevailed and we swiftly changed the topic to avoid an inevitably heated debate. We managed to steer the night’s conversation back to smoother waters, but a seed had been planted.

I spent the rest of that trip battling a case of food poisoning, which in all its ironic likelihood, I probably got from spoiled meat. Back in SF while she continued her travels, I tried to stay rational as the seed from that dinner sprouted into passive-aggressive link-sending. I kept researching for more evidence to support my view while poring through the studies she shared to support hers. Emotions escalated as tone was lost in a flurry of texts. More links were sent. Things got personal. Finally, we both agreed to a ceasefire. We were both so steeped in our own echo chambers that arguing was pointless.

Shortly thereafter, I asked her to keep sharing relevant resources that she came across, promising not to retort. If I’m being honest, that was partially a posturing move, an ostentatious cue that I was taking the high road, but I also genuinely wanted to learn more. I thought, if I’m going to disagree with what’s now becoming mainstream, I should at least do the reading.

And so I did. I read a lot. Past the headlines, past the articles even, to the cited sources and underlying studies. As I kept digging to find the truth, I went down many rabbit holes. What should have been a few cursory Google searches turned into weeks of conflicting research. By the end, all I could reasonably discern was that even the oft-cited experts disagreed and varied widely on the quantified environmental impact of animal agriculture.

Yet deep down, I still believed that animal agriculture could be a force for good and that this nuance was largely overlooked or outright ignored by mainstream media and even scholarly research. Probably influenced by the bucolic idealism in the film Food, Inc. and Michael Pollan’s Omnivore’s Dilemma, I know I hold a longstanding bias. My research was meant to break through that bias, or at least fray at its edges, but logic and reason still told me that veganism couldn’t be the answer. After all, the prevailing methods of plant agriculture still produce environmental harm, and properly managed livestock can play a critical role in ecosystem health.

Feeling more lost than before, I stopped reading all the statistical research and instead examined different agricultural modalities. I learned about holistic management, planned rotational grazing, and other land management strategies built on the principle that farming can be regenerative rather than extractive. These practices seemed to confirm the idea that it’s not about what we eat, but how it’s grown and raised.

Meanwhile, plant-based meat was having a moment. Impossible Foods was blowing up in the press. Beyond Meats was wowing investors with its stock market performance. Incumbents were releasing their own plant-based meat alternatives. One of them was called IncogMeato — that in itself was horrifying. And the public was eating it up. Literally. Beyond Meat did $92 million that quarter and announced partnerships with McDonald’s, KFC, and Subway. Other fast food chains went team Impossible: Burger King started peddling the Impossible Whopper, White Castle the Impossible Slider, and Little Caesars the Impossible Supreme pizza.

It scared the shit out of me that while I was learning about the potential for livestock farming to reverse climate change, the whole world seemed to be jumping on the plant-based bandwagon, ready to burn down the world of animal foods. Headlines evangelized plant-based meats for their power to save the planet, and I thought, “Don’t they see the bigger picture?” Influencers touted veganism more loudly than ever, athletes took up the plant-based torch, and acclaimed directors like James Cameron joined the battle cry. I wondered, “Has everyone gone mad?” Then I remembered that government agencies and global organizations have long been urging the public to eat less meat for better health, and more recently to combat climate change. I finally conceded, “Am I the crazy one?”

So, I did the math. According to the Environmental Protection Agency, 9% of US greenhouse gas emissions comes from agriculture. The 25% figure some headlines throw around is actually 24% globally (splitting hairs, but still), also from the EPA, and it includes “agriculture, forestry, and land use” but excludes any carbon sequestration from this sector. Of global agricultural emissions, 58% comes from animal agriculture, while 42% comes from plants raised for human consumption, meaning the former accounts for crops grown as animal feed (according to a research article by Poore and Nemecek published in 2018 in Science). By my calculations, taking US emissions and diets as a proxy for the rest of the world, converting all meat production to the equivalent number of plant calories would remove 3.6% of global GHG emissions, all else held equal.

That is, if the entire human population stopped eating meat and went 100% vegan, we would eliminate only 3.6% of our collective GHG emissions.

That’s not completely insignificant, and there are many flaws in my calculations including my assumptions based on US figures and those inherent in the source data themselves, but it’s not what the plant-based hysteria makes it seem. For example, that same Science article goes on to say that “a 50% reduction in animal products targeting the highest-impact producers delivers a 20% reduction in global greenhouse gas emissions.”

Regardless, I immediately thought I miscalculated, and I asked friends to check my math. None did. What sane person would? So I combed through it over and over to see where I went wrong. And then, by chance, I came across a study that simulated the same scenario, a 100% vegan human population. That study put the GHG reduction at 2.6%. Another put it at 4.3%. Confused yet? So was I.

Then, a new study came out. A third party Life Cycle Assessment by Quantis, the same firm that performed the LCA for Impossible Foods. According to this study, the beef at White Oak Pastures might be carbon negative. That means in raising cattle for beef, the farm sequesters more carbon into the soil than it releases. This net benefit to the environment has long been the promise of what’s known as regenerative farming.

Regenerative is not yet a certified or regulated term, but those that align with it in earnest take a philosophically different approach to land than the conventional one practiced on the bulk of US farms and taught in agricultural universities. These maverick farmers are challenging the idea of land as a depreciating asset from which to extract, the idea of food as a commodity to mine from Mother Nature.

Regenerative farmers practice a number of methodologies that share at least one core goal: to increase the health of the soil. And healthy soil, I began learning, improves everything. It improves the health of the livestock animals that dwell on it, the cash crops that grow out of it, the ecosystem of wildlife that surrounds it, the trillions of little microbes that live within it. Healthy soil improves resilience in drought and resistance to floods. And it stores more carbon. The deeper I went down this particular rabbit hole, learning about soil health, regenerative agriculture, and biomimicry, the more hopeful I became about our collective future.

That Life Cycle Assessment is still pending peer review but confirms, at least directionally, what I’ve always believed: farming doesn’t have to be a zero-sum game; smarter agriculture can produce positive externalities. And it just so happens that the farm in the study, White Oak Pastures, has an internship program.

So, three months ago, I moved to the country. A small town in southwest Georgia called Bluffton, where the population is 100 and yes, there is a bluff. It was the first of November, 2019 when I left San Francisco, almost 18 months to the day since I moved there to work for a rapidly growing tech startup consuming the on-demand delivery space. San Francisco came after 12 years in New York City. New York is the city I call home. It’s where I went to college and met my closest friends. It’s where I made the fondest memories of my young adult life, living the cosmopolitan dream: fancy dinners and trendy brunches, endless and sometimes over the top nightlife, weekend trips and regular overseas travel. And I was leaving all that behind, again, to move to rural Georgia, far from home both culturally and geographically, to live and work on a farm.

The convenience, the opportunity, the optionality of big city life are unparalleled, and I’ll admit, I already miss some aspects of it. Yet I somehow feel more excited about the opportunity here, in this profoundly rural place, a town in waning after local peanut plantations, milling operations, and other businesses closed their doors. Because while I came here to learn to farm, I also came to see if there’s hope — hope for the kind of future I want to live in.

Join the Food Ink newsletter, a not-quite-weekly email spanning everything from food systems and agriculture to food sovereignty and climate justice to heritage, community, and culture. Plus, updates on new essays and podcast episodes.