On Loving Animals and Eating Them Too Or: Why Meat is Murder and Veggies are Genocide 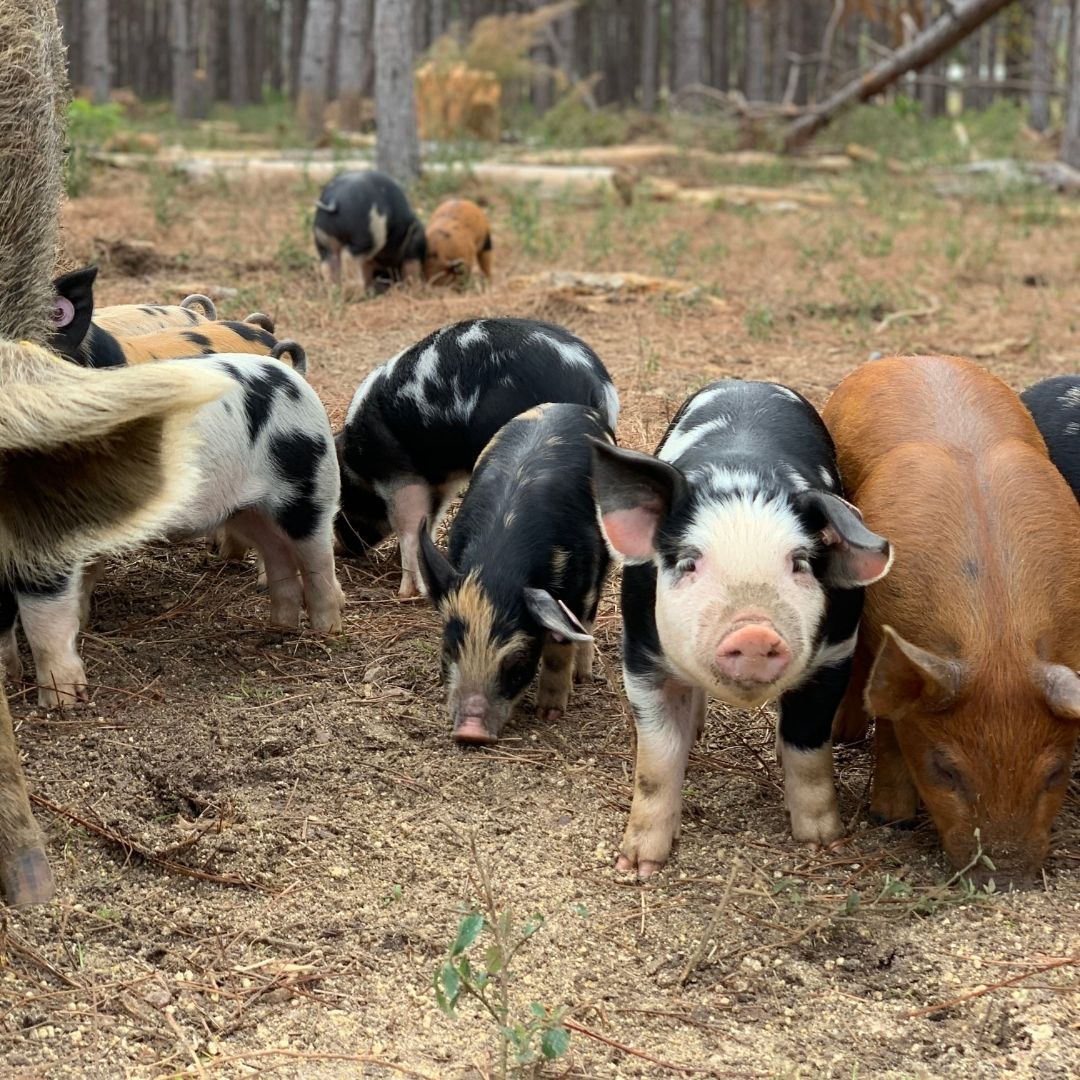 These pigs are raised outdoors, in the woods, with plenty of room to express their instinctual behavior and benefit the land.

It started innocently enough. It was 10:23pm on a Thursday night when I saw the notification. Someone had commented on an older photo on my finsta (that’s farm Instagram in my case). It was a genuinely good-natured question about an otherwise controversial and divisive topic. I tried to answer as thoughtfully as possible in the limited real estate of my phone screen. Tapping with my thumbs turned into clacking away on my laptop keyboard. When I looked up again, it was 2:03am. My response to a simple Instagram comment turned into a 1,500-word essay. Here is that essay, because I fear it won’t fit in the comments. Thanks Jennifer for the question, and looking forward to hearing your thoughts.

@onthepurplepath: Hi, 👋🏽 I have a question you could DM me if you prefer. I’m not a troll, I’m genuinely curious how you feel about killing lambs for food, as you seem to show compassion for their needs like mother-baby bonding and even nutrition. I like learning about people’s ways of thinking. Personally I always gravitated to vegetarian/now vegan eating because I didn’t want to harm the animals if I could eat harm-less foods for the equal nutrition. Thanks for answering

@edlinbetsthefarm (me): hi! Thanks for the honest question. I’ve struggled to articulate a good answer for this myself, which is why I’ve always tried to get closer to the process. This has been a tough one for me to defend in recent years. One of my friends, whom I consider to be incredibly intelligent, once made the bold if not oversimplified claim, “There is no moral argument for eating meat, period.” And with all the current plant-based fervor that has many of my friends and peers moving away from meat, I have found myself gravitating even closer to it. Given my research and reflections on it over the years (from a distance), and my recent step to get a more intimate, firsthand understanding of the whole process, here are my current thoughts, which are still evolving.

We are animals. Some animals eat plants. Some animals eat animals. Both are fine. They are both natural and necessary to a healthy and balanced ecosystem. Without predators, ecosystems collapse. There’s a phenomenon called trophic cascade, where a change to one species has a far-reaching impact on others one level removed from it. The best way to understand it is via this real life, though somewhat controversial, example.

When wolves were eliminated from Yellowstone, the elk populations exploded. With no predator to keep their numbers in check, they overgrazed the area and wreaked havoc on the once thriving ecosystem, destroying the habitats for untold numbers of mice, foxes, beavers, and other species. Basically, wolf numbers went down, so elk numbers went up, so mouse/fox/beaver/etc numbers went down as their habitat was quickly eroded.

When wolves were reintroduced, and this is the controversial part, elk numbers became more manageable, plant life bounced back, and so did the other species that had shrunk in population. The controversy is around whether the return of wolves alone were enough to reduce the elk population, pointing to the contribution of human hunters in that effort.

What’s undisputed, though, is that removing the wolf had immense ecological impacts on the park, disturbing its balance. The kind of balance, and therefore life, that the predator-prey relationship enables. This phenomenon of trophic cascade illustrates that death is necessarily a part of achieving that balance, and ultimately enables life in greater numbers and diversity. Without that balance, an ecosystem can quickly become barren.

For hundreds of thousands of years, humans were a part of that balance. With the advent of agriculture, we found a way to cheat the system and manipulate and exploit ecosystems for our singular benefit. Then, with industrialization, we got really good at it. Single-mindedly working towards maximizing output, we destroyed the long-term health of our lands for short-term productivity gains, and are now at risk of causing irrevocable damage to our planet. The way I see it, trying to solve this by moving away from eating animals and becoming more of a plant-based society is rather myopic. It won’t actually repair any of the damage we’ve done, will continue to cause more of the same damage, and will likely have unforeseen negative consequences.

That’s because eating plants is not actually harmless to animals. As a vegan, I may not directly kill an animal to eat it, but I indirectly kill many other animals to eat plants. Mice and other rodents are killed in harvest. Insects and undesirable plants die so that the cash crops may live.

What’s worse, the vast majority of our plant foods come from industrialized mono cropping operations with far-reaching externalities. These are massive swaths of now-barren land, propped up by the reductionist illusion of abundance afforded by synthetic fertilizers and chemical pesticides, all made possible by fossil fuels. The pesticides get into our soils, our food, and our waterways, harming us, other animals, and the planet. The fertilizer runs off into waterways and cause algal blooms that lead to massive die offs of marine life.

Organic plant-foods are complicit, too. Most are grown on industrial organic farms that use organic-approved pesticides and organic fertilizers, which still run off into waterways.

These negative externalities aside, the very nature of cultivating plants is a declaration of war against certain species. Even in the rare bucolic fantasy of a small-scale, organic vegetable farm, the farmer is waging war against insects and other would-be predators of his desired harvest. Depending on his methods and philosophies, the farmer’s tactics may not be chemical but are lethal nonetheless.

Take the best case scenario for growing produce, a regenerative farm like Apricot Lane Farms from the film The Biggest Little Farm. Those farmers use the most natural methods of pest control: other animals. Snails were decimating their stone fruit trees, until they eventually learned that their ducks loved to eat snails. So to ensure a healthy yield of fruits they could take to market, they let their ducks into the orchard every so often to eat the snails and keep those mollusks in check.

Eating and cultivating plants, then, is not harmless and does not absolve us of any of this death and destruction. We may not see and eat the animals we’ve killed, but that does not mean we did not cause those deaths, possibly in even greater quantities per pound of food consumed. We face it more directly when we eat an animal we’ve killed, but the deaths of those rodents, insects, and fish are no less certain when we eat plants.

That’s not even to speak of the plants themselves, because much of what we plant for consumption are annuals, meaning they must be grown from seed every year. We plant the seed, we do all the things that help it grow while causing the many other aforementioned deaths, then we kill the whole plant to eat the part we want. Oftentimes, we don’t eat it at all, given that 33.7% of edible produce dies on the field because they don’t live up to our picture-perfect standards. So much death, in vain.

Of course, that’s the case when we waste meat as well. I hate wasting food, and perhaps given the wider extent of death by plant rearing, I should be more repulsed by wasting plant foods. But in reality, I particularly abhor wasting meat for the very reason that we more closely link that food to the death of an animal.

Maybe that’s why I gravitate to meat in the first place. Because it’s too easy with plants to forget the implications of our actions, our eating, our indulgence in the overabundance of our kitchen cupboards and grocery store shelves. At least with meat, I’m somewhat directly confronted with the consequence. It’s easier to make the connection to my impact. So long as I honor it, and do not waste it, I don’t bear any guilt for it. Why should I? After all, we don’t shame lions, bears, dogs, or cats for eating animals. Nor do we shame elk for overgrazing in Yellowstone and decimating the populations of mice, foxes, beavers, and other species that depend on that habitat. They are only acting out their particular role in their ecosystem.

🎶 Edlin had a little lamb 🎶⁣⁣
⁣⁣
The ewes have been lambing this month! Baby lambs can’t process grass until they’re a few weeks old and are entirely dependent on their mother’s milk for that time. But that won’t stop them from nibbling on some grass in an effort to imitate their moms.⁣⁣
☺️⁣⁣
It’s crucial for the ewes to maintain nutrition and weight while nursing, so their lambs can grow big and healthy — they grow the most in the first 5 months, at which point they can be weaned. Once the lambs are weaned, the ewes will be able to gain weight again for the next breeding season. ⁣⁣
🍼⁣⁣
We’re breeding some of the other ewes now because ideally they would lamb in April. That way, when we get that high grass growth in mid-May, the lambs are big enough to benefit from forage along with the ewes. ⁣⁣
🌱⁣⁣
It’s tough having lambs in winter because the lower nutrition in the grass means you have to move the flock more often and herding young lambs is difficult and stressful on them and their moms. It also makes it a challenge for them to bond properly. We are using hay to mitigate this a bit until we get on a better lambing cycle. Meanwhile, it’s been adorable watching these little lambs grow. When we do move the flock, the ewes sometimes get separated from their lambs, and watching them call for each other (that’s why they bahhh) in the new pasture and reunite is pretty freaking cute. ⁣⁣
⁣🐑⁣

Properly managed grazing animals — cows, goats, sheep, bison — can restore ecosystems, bring life back to soils, improve the local water cycle, and sequester carbon, making some farms a net carbon sink. This kind of grazing can sequester up to 8 tons of carbon per hectare per year. These animals are critical to restoring our grasslands across the globe, which cover “37% of the earth’s terrestrial area.” That’s 5 billion hectares, meaning the potential to sequester up to 40 billion tons of carbon each year. To me, it’s abundantly clear that livestock farming has an important role to play in the continued existence of humans on this planet, of life as we know it.

These animals know their role — eat grass, defecate, move on — but in our modern, global context, we as humans have struggled to find ours. Rather than choose from the false dichotomy presented by an overly reductionist and binary view of food, I think we need to take a broader and more holistic view. That requires a deeper, more intimate understanding of not just our food but our unique place in the global ecosystem as stewards of the land. Because a global food system without animals is not actually sustainable, despite what Pat Brown and Impossible Foods will have you believe. After all, what’s the good in sparing a few animals now if it means the whole system falls apart in the end?

Join my newsletter for more like this. I share relevant news and personal essays on how food and agriculture can save humanity, plus exciting updates on my regenerative journey and the occasional baby goat pic 🥰 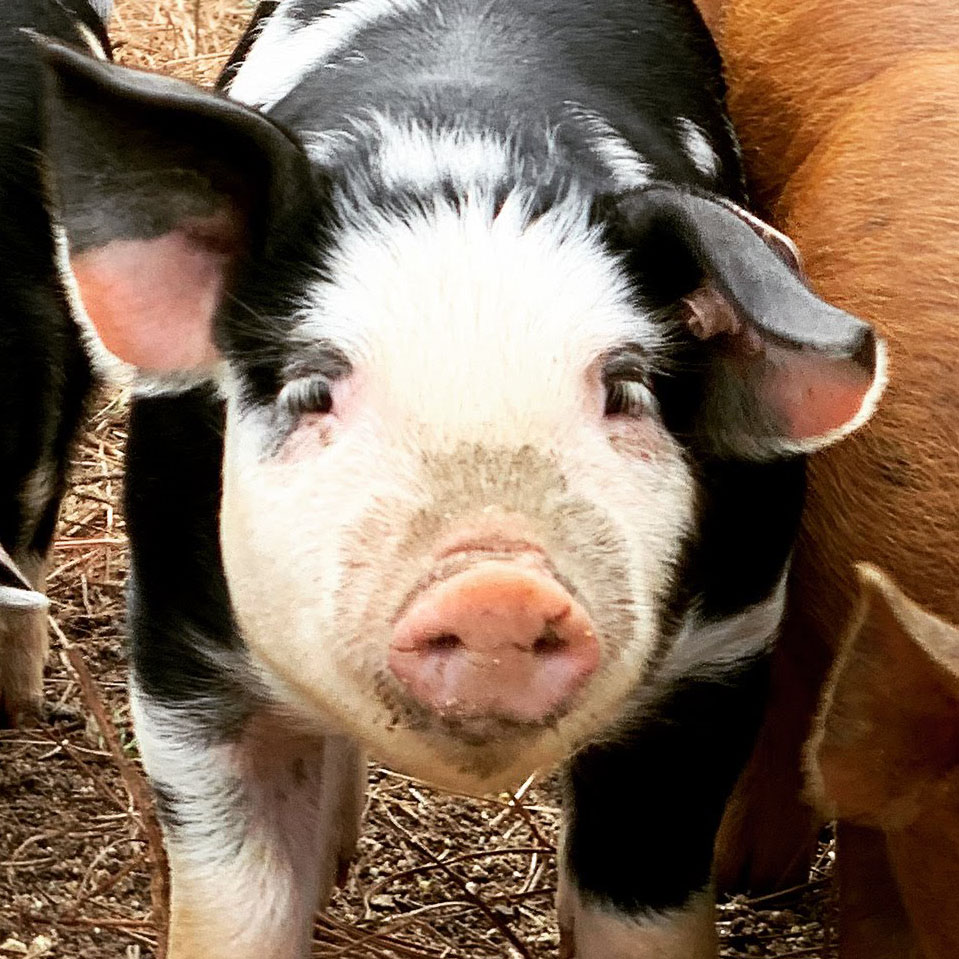 Thanks! You've been added to the list!
Oops! Something went wrong, maybe a typo. Try again?